So I was really excited about the opportunity to do a book signing at the Chick-Fil-A nearest our house--about 45 minutes away.  I had set things up at least a month in advance with the Marketing Director, had brought promotional materials three weeks ahead of time, and the night of the signing I showed up ready to sell lots of books.

I was ready.  They were not.

I walked in with my banner and approached the counter.  "Hi!  Can I speak with whoever's in charge tonight?"

Poor guy.  I waited uncomfortably while he called the marketing person, talked with the staff that was there, etc.  I was quite ready to leave--it looked like it was their slowest night anyway, and I'm guessing the promotional materials never made it out of somebody's office.  Quite surprising.  I am definitely not criticizing Chick-Fil-A.  I still think they're awesome; this was just a glitch somewhere.

Anyway, just as I went up and offered again to reschedule (anything to get out of this uncomfortable situation!), they started setting up a table for me.  I really didn't want to stay if it hadn't been promoted, but then the manager guy said some people had called in about it, so I didn't want to leave if people were expecting me to be there.

Eat free food.  That was a great start.  They were very nice and gave me my supper for free, and some Diet Lemonade, which if you've ever been to a book signing, you know it's a great thing to have a drink of something in your hand to make you not look quite so bored sitting there waiting for someone to show up.

I sold 2 books.  Uugh.  It's embarrassing admitting that to you!  Blame it on the glitch, the major storm that came through, maybe my book stinks, who knows?  I did get to talk to some really great people (like a commander on the police force who has actually gone in and dealt with trafficking groups, who just "happened" to be there eating supper that night--pretty cool!), and like I said I love the Lemonade, so the evening wasn't wasted.

About halfway through, the manager guy left for awhile.  He came back in totally soaked.  One of the ladies said, "It wasn't raining when you went out there, was it?"

The lady looked over at me.  "Well, your name's on the marquee now!" 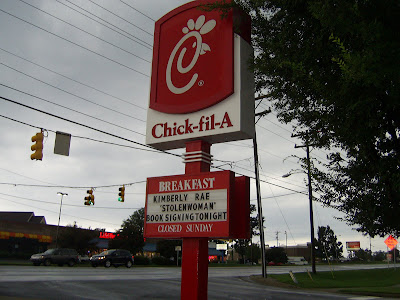 Poor guy again!  I didn't mean for him to get all soaked on my account. Though I have to say it was pretty neat having my name on a sign for all the world to see (or at least all the people driving through the pouring rain not wanting to stop and buy my book.  ha ha).

What did I learn from this fiasco? Double-check things before you show up! And if you are going to have a fiasco of a book signing, you might as well do it in a place where people are nice and feed you. =)

The thing I find funniest about the whole situation is that the photo above is a great marketing tool for me. I post it sometimes and people think it's really cool that my name is up on the sign at Chick-Fil-A, like I'm a great writer or something. Looks can be deceiving! =)

What about you? Have you had any book signings yet? Have I scared you away from every having book signings? ha ha Share your story below!

Next Week: Should You Pray for Success for Your Writing?

Welcome! This is my special page just for writers. Whether you're brand new or a seasoned pro, I hope you'll find something here that will help and encourage you as you take the next step forward in your writing.

This will be written for the generation to come, That a people yet to be created may praise the LORD. Psalm 102:18

So You're Writing a Book Part 1

So You're Writing a Book Part 2

Check out my Amazon bestselling series at www.kimberlyrae.com!